A box of tricks

A great little job came into the workshop the other day, a travel chest or steamer trunk that needed some fixing up: 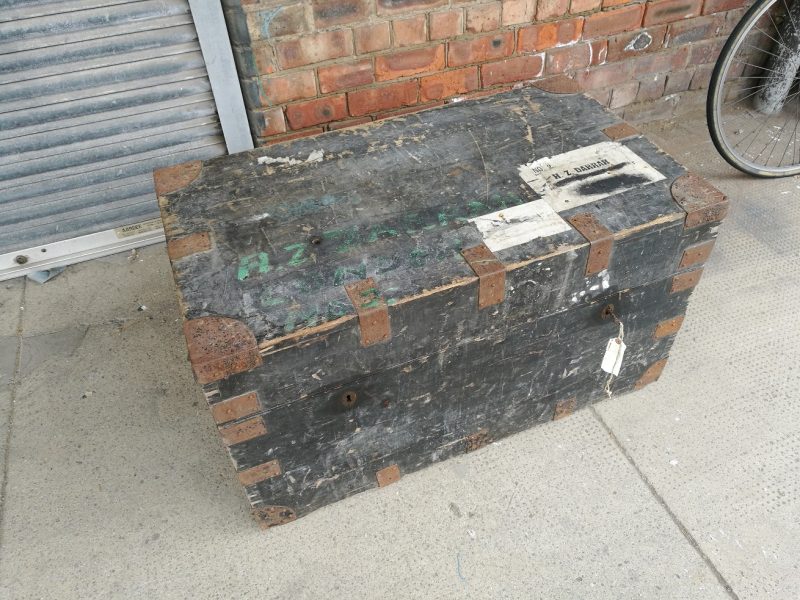 It needed a few jobs doing to it. The key was there, but only because it was jammed in the lock! That would need releasing and the locks made to work again. The whole piece needed a light sanding and refinish, but the brief called for the patina to be retained as much as possible. There were also a few bits of timber and metal that needed attention.

I started with the key. It took an hour but finally it was free: 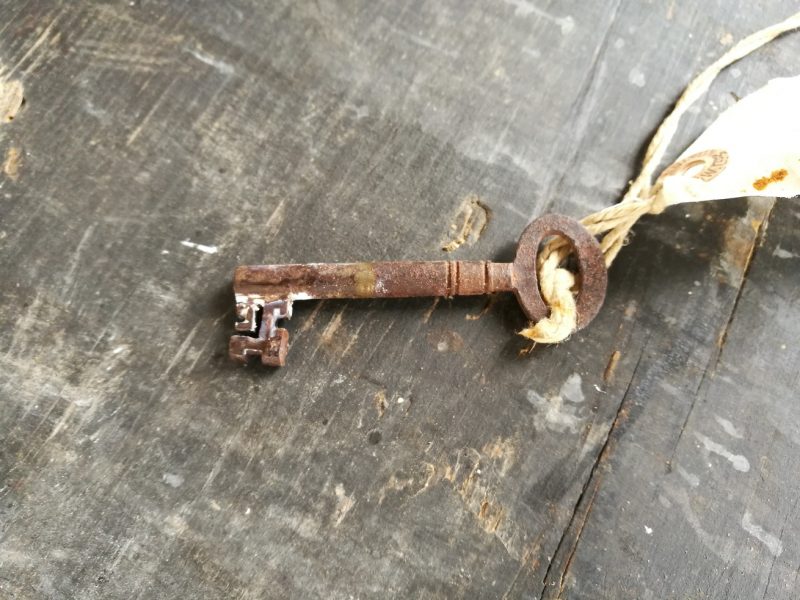 The key itself was bent, and it took all of these tools to encourage it out of the lock: 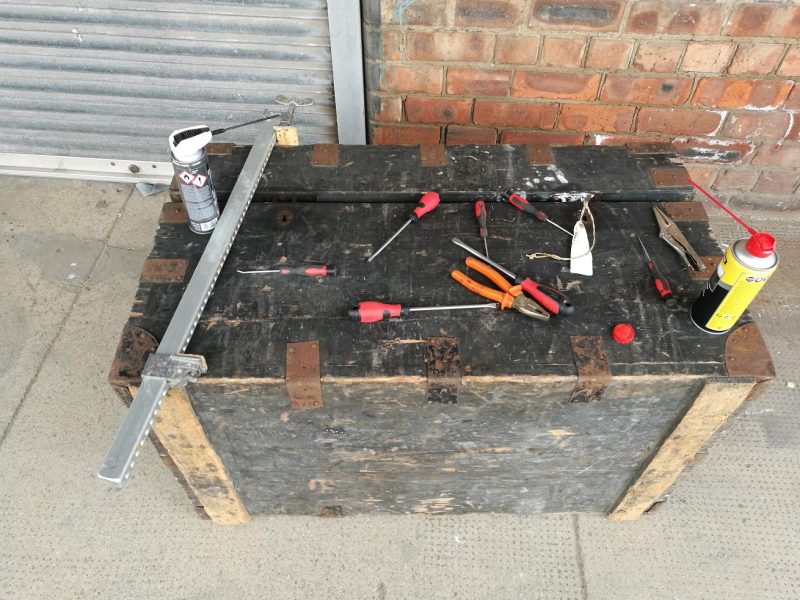 Hoping for a fortune, we opened the lid… 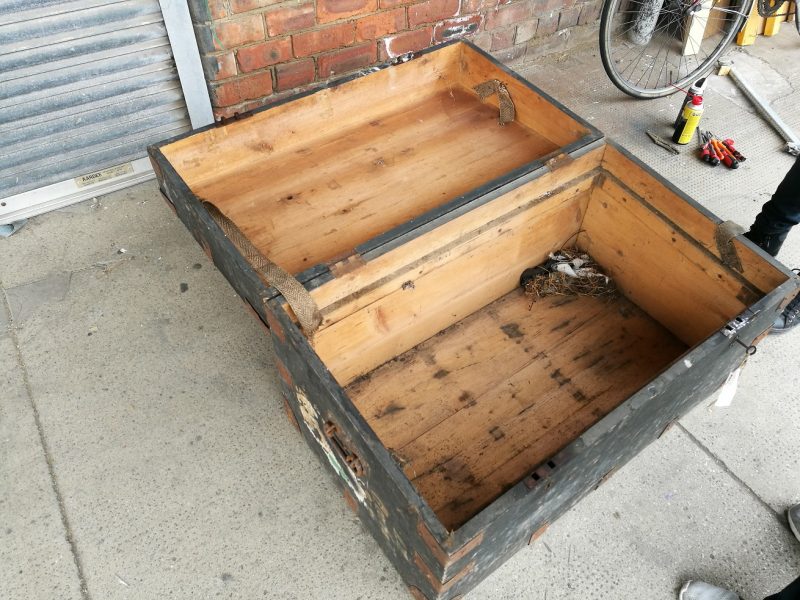 No diamonds or stacks of cash, but there was a rat’s nest. I removed that, the remains of the lid stays and the hardware: 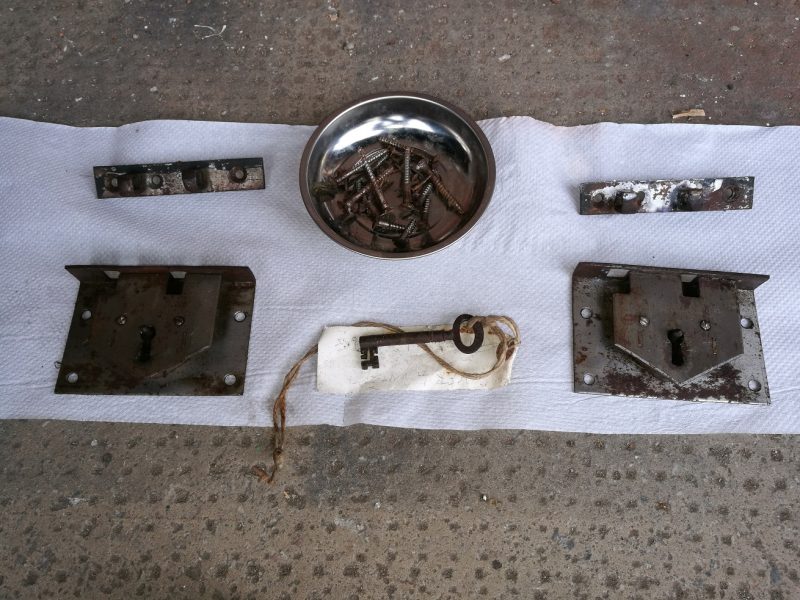 I worked on the two locks to get them back to working order, then cleaned all of the hardware ready to be reused: 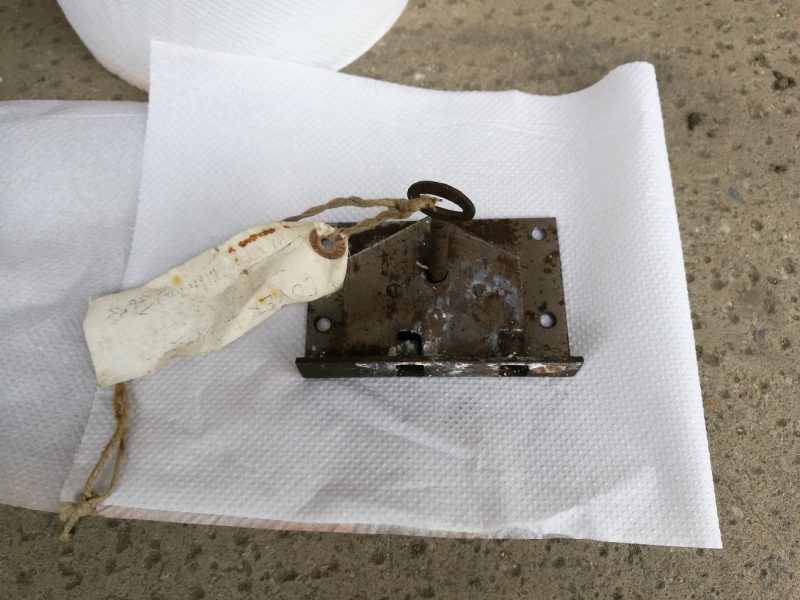 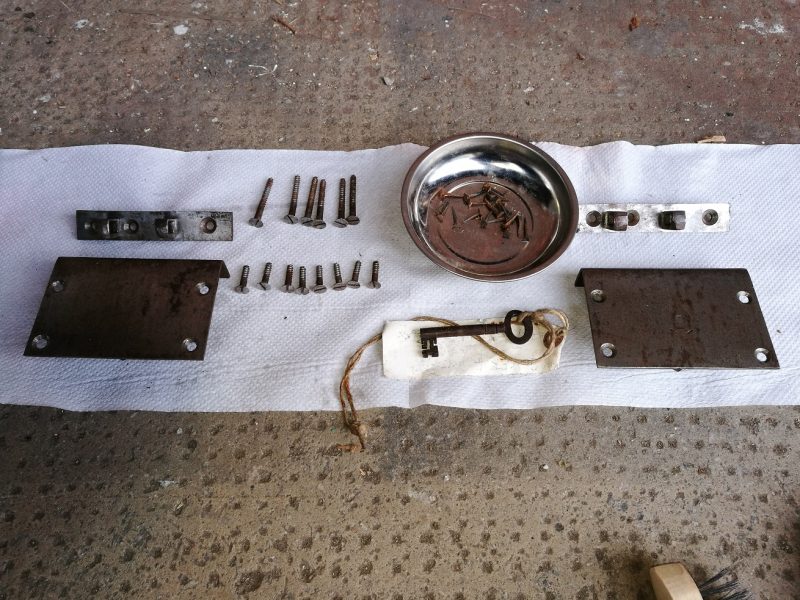 Before I could reattach the locks I need to repair the timber around them. The screws had enlarged their holes and a chunk of the rim had been broken: 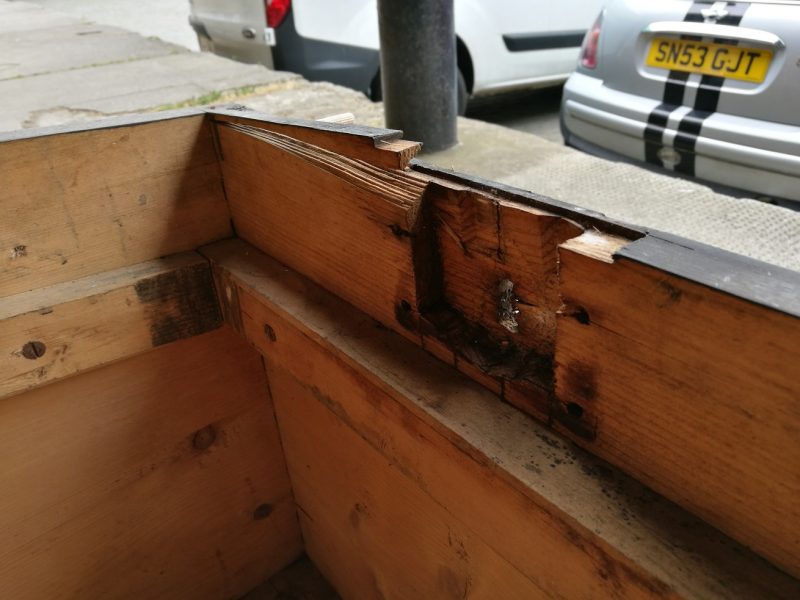 I plugged the holes to be redrilled and glued the timber back into position: 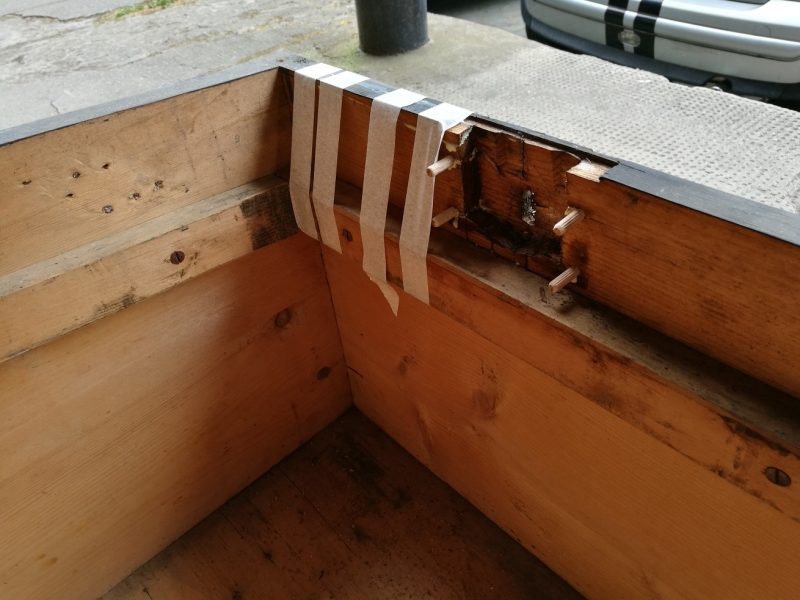 Once that was dry I could redrill the screw holes and reattach the locks: 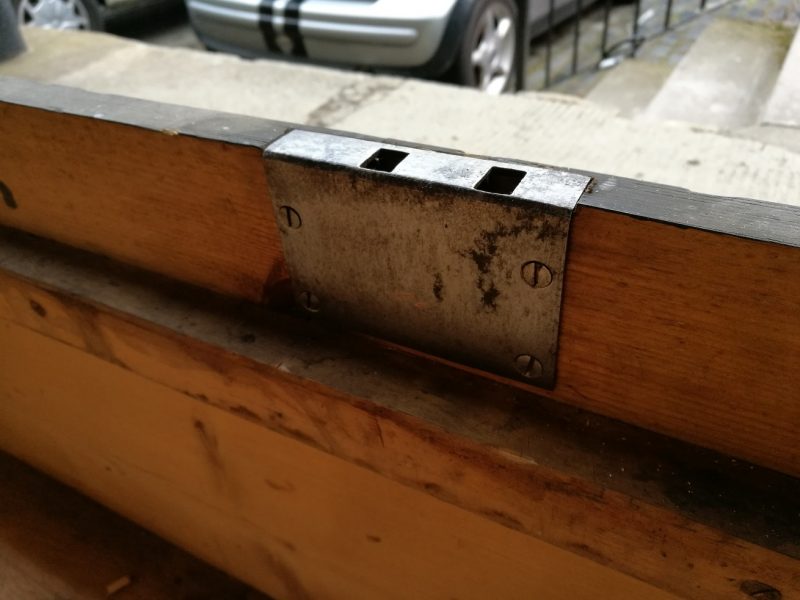 The catch plates had also split the timber where the screws had been: 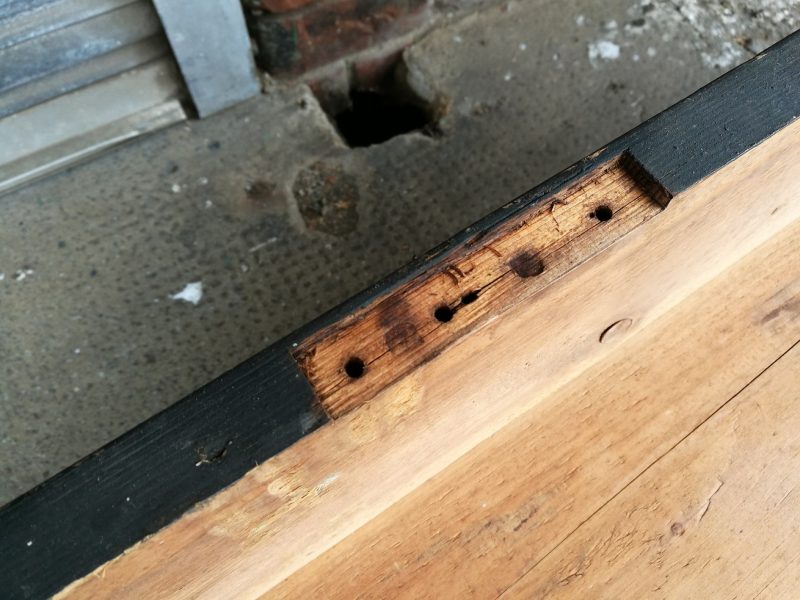 I glued these before reattaching the catch plates: 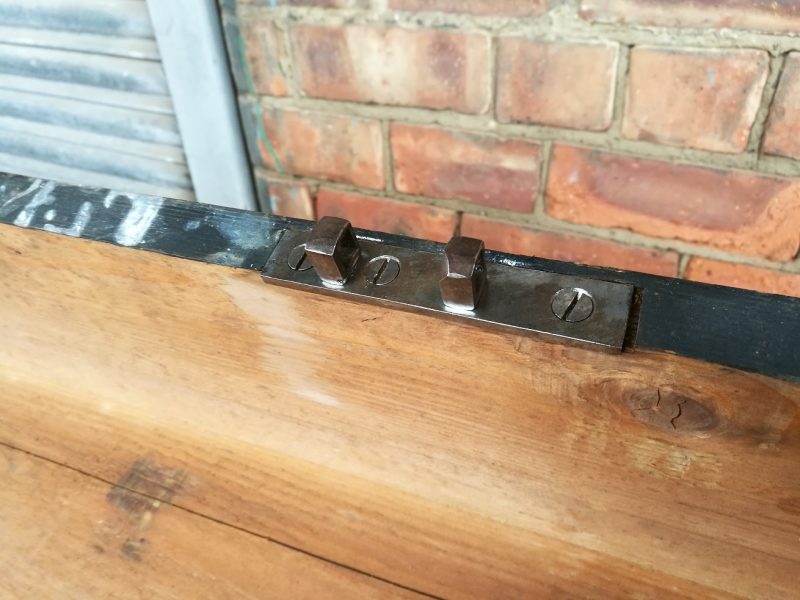 Next I could reattach the hinges: 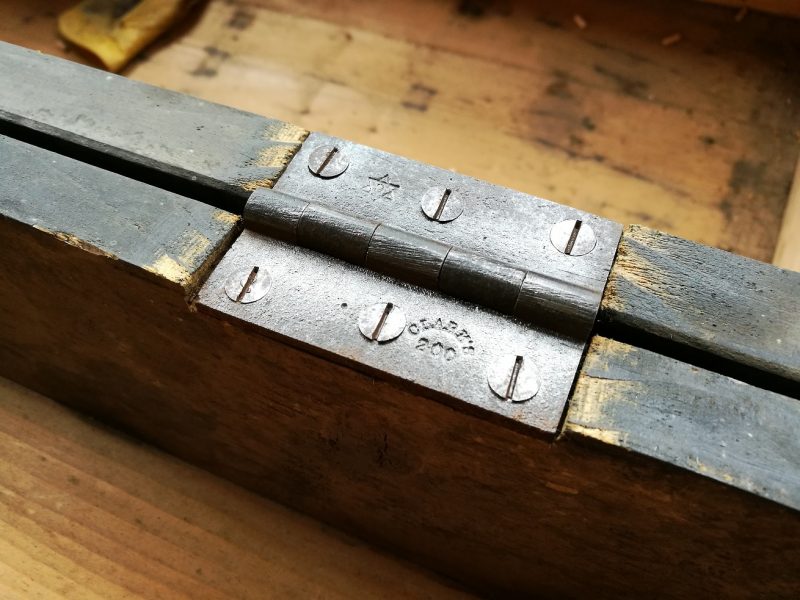 With the chest back together I could give the inside a gentle sanding to remove any splinters and rough patches whilst keeping the patina. I gave it several coats of white wax, which the dry wood soaked up really well. I used furniture webbing to make new lid stays, using the original pins, to complete the inside: 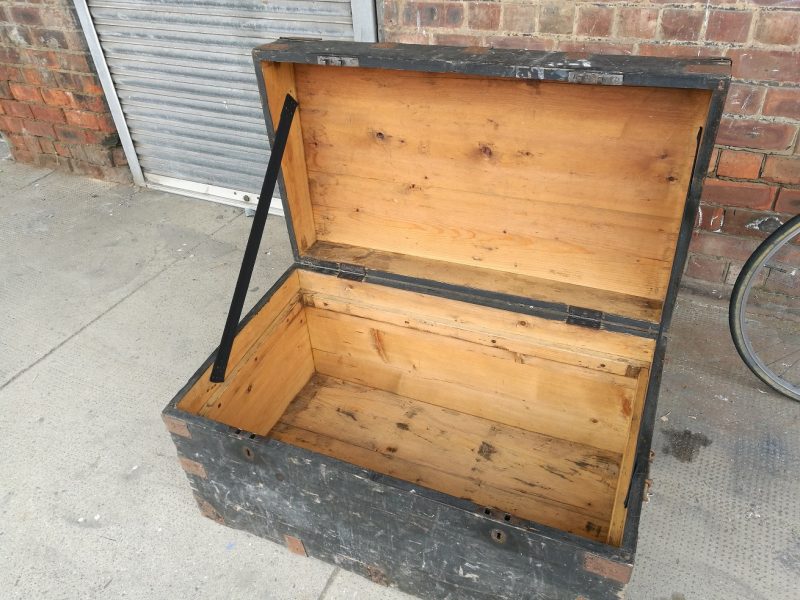 We have swallows nesting all over the site, and whilst I paused for lunch this wee bird decided to supervise my work: 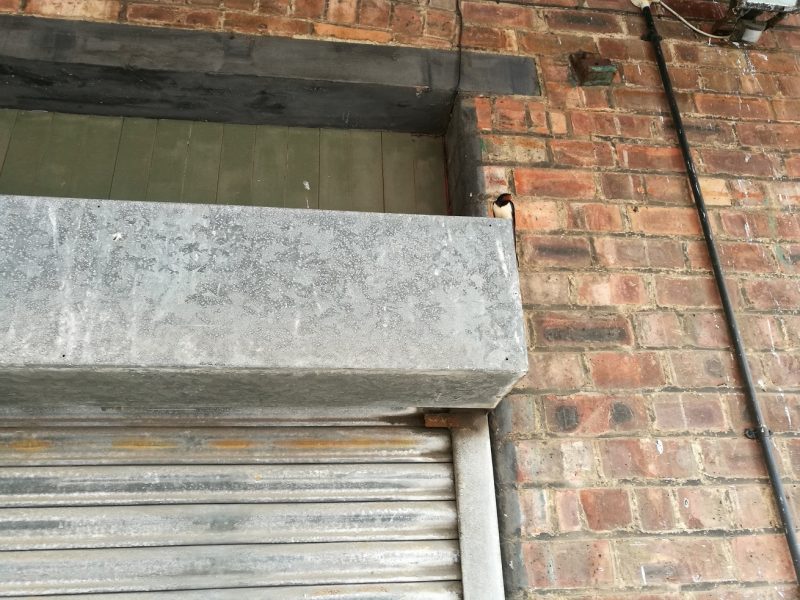 Next I tackled the metal on the exterior. Some were loose and needed to be reseated in position: 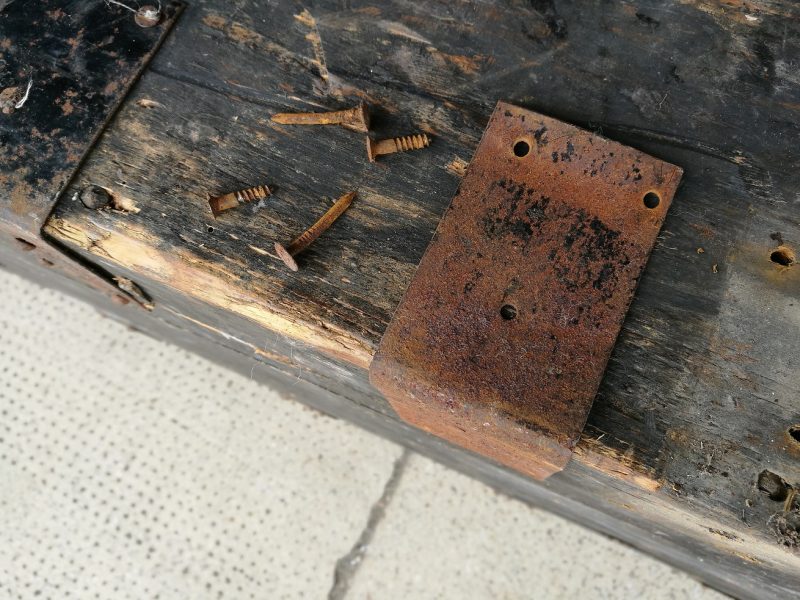 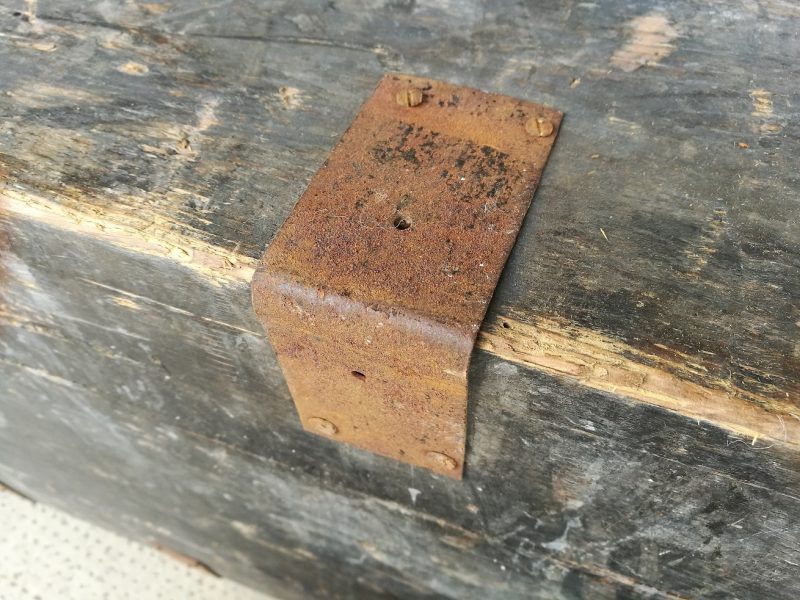 And some were damaged and needed to be persuaded back into their original shape: 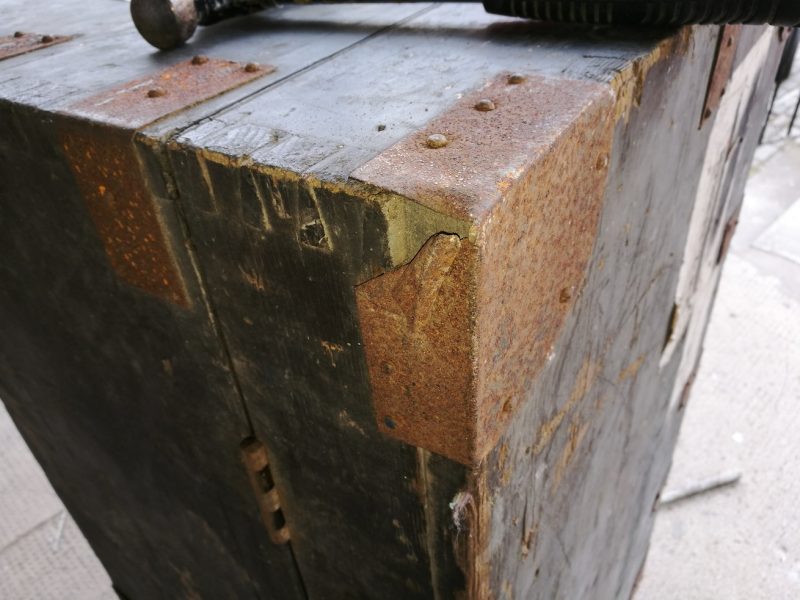 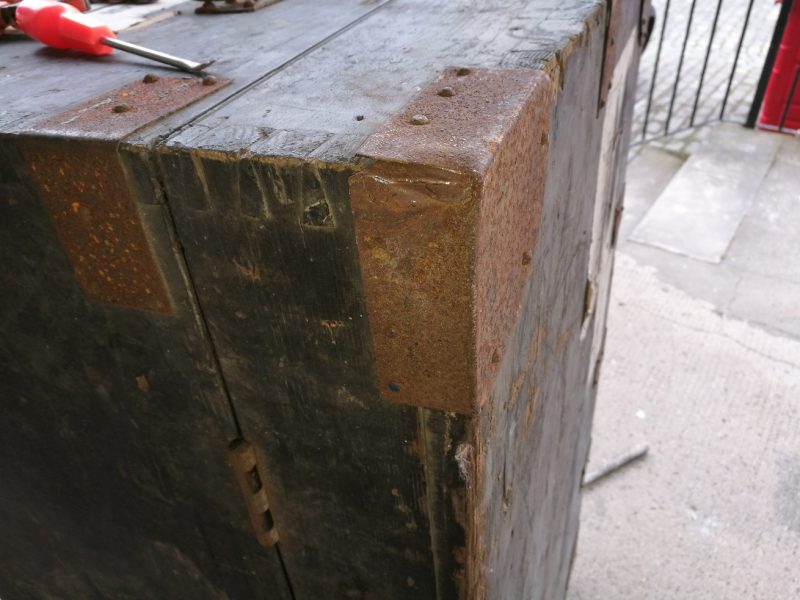 They were all individually cleaned with a wire brush, removing all of the loose rust but keeping the looks. The last big job was to look at the runners, which were quite battered and showed signs of water damage: 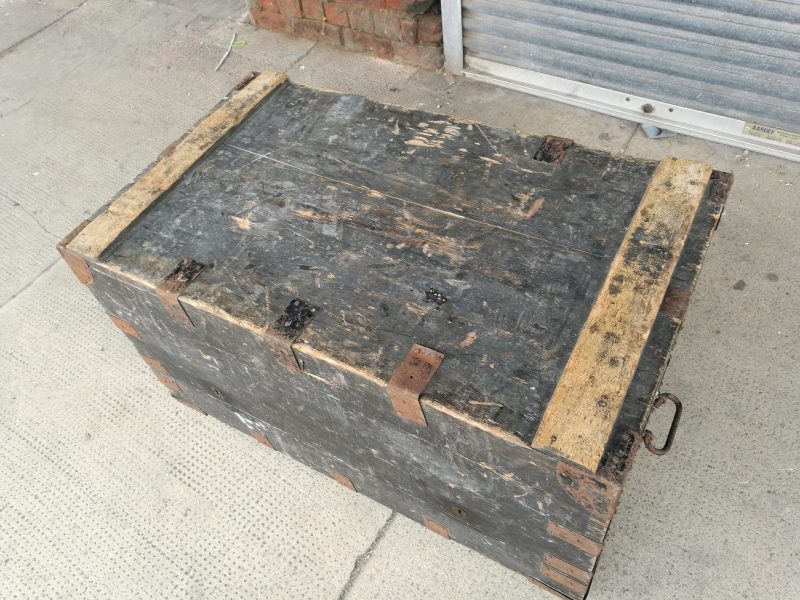 As these are designed to be easily replaceable, and the chest might sit on carpet in the future, I took the decision to replace them. I cut some pine to length and chamfered all of the edges before using the original fixings to reattach them: 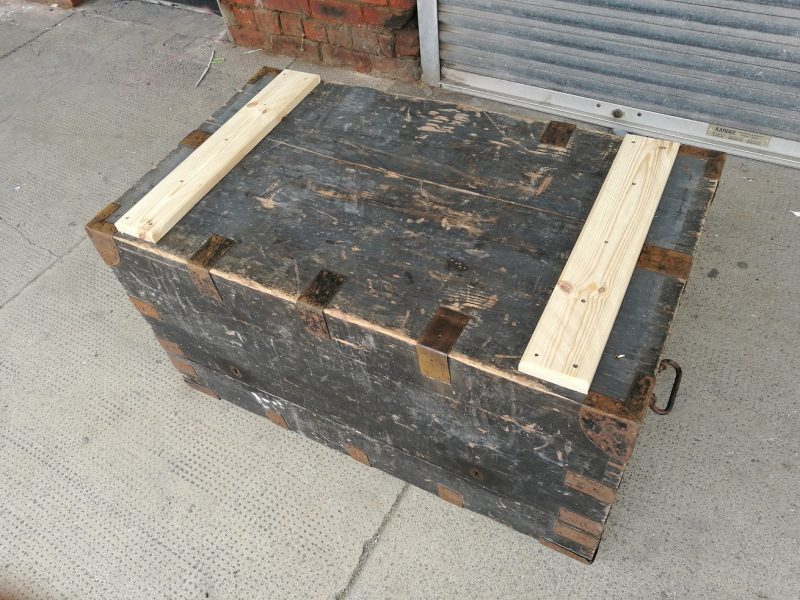 The final job was refinishing the outside. I very carefully sanded and scraped the entire chest to remove any splinters and sharp edges before coating the whole piece in one coat of Osmo black tinted wax oil. This had the effect of blending the repairs with the older remaining damage without hiding the patina. When that was dried I added several coats of white wax for protection and the chest was complete: 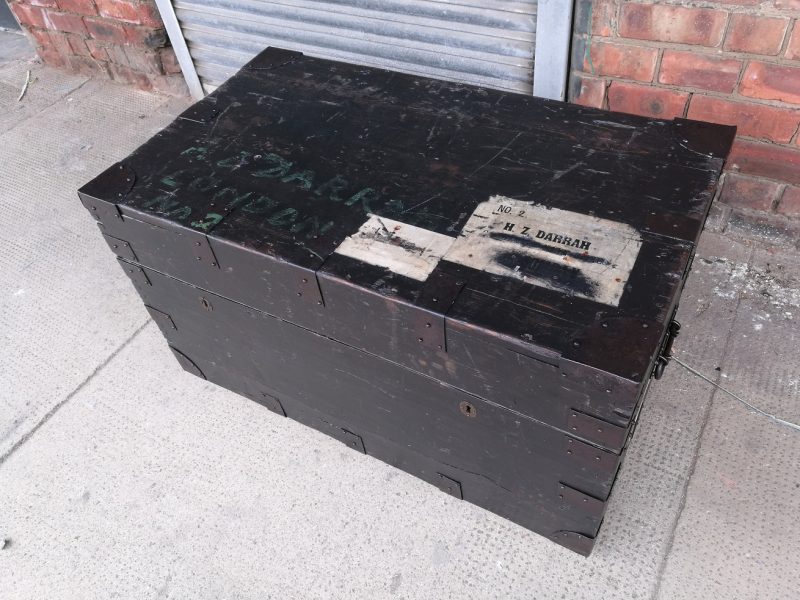 I was really happy with the final result. All of the original finish was preserved, including the fragile shipping labels, and the writing was highlighted beautifully by the finishing process. Another happy customer and another satisfying day’s work.

If you want any furniture or wooden items large or small please get in touch for a free quote and advice.

This website uses cookies to improve your experience while you navigate through the website. Out of these, the cookies that are categorized as necessary are stored on your browser as they are essential for the working of basic functionalities of the website. We also use third-party cookies that help us analyze and understand how you use this website. These cookies will be stored in your browser only with your consent. You also have the option to opt-out of these cookies. But opting out of some of these cookies may affect your browsing experience.
Necessary Always Enabled
Necessary cookies are absolutely essential for the website to function properly. This category only includes cookies that ensures basic functionalities and security features of the website. These cookies do not store any personal information.
Non-necessary
Any cookies that may not be particularly necessary for the website to function and is used specifically to collect user personal data via analytics, ads, other embedded contents are termed as non-necessary cookies. It is mandatory to procure user consent prior to running these cookies on your website.
SAVE & ACCEPT